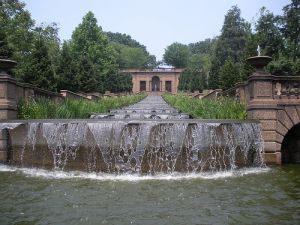 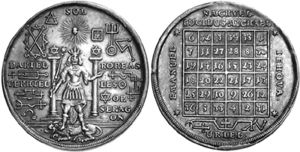 “Sigilla Solis” or “Sun Seal” This amulet has the god of the sun standing on the lion. These drawings from photographs taken in 1910, show actual amulets then in the Berlin Museum. They reveal the veneration the ancients had for the sun-god. On the front side of No.1 we see the god of the sun standing on the lion. This indicated the sun's position in the constellation of Leo during the hot days of August. The back is inscribed “Nachyel,” meaning “intelligence of the sun” and the numbers 1 to 36. These numbers are arranged in such a way that the sum of any given row, column or diagonal is 111, and therefore the sum of all six rows or all six columns is 666.

This illustration is also a solar seal, but it honors the star Basilisco, which was the diminutive form of the Greek Basileus (king), thus meaning the same as the Latin regulus. Regulus is the only first magnitude star in the constellation of Leo. The sun and the moon are again clearly seen on this amulet and on the reverse side is the same arrangement of numerals with the actual figure 666 given as the total.

«The ancients claimed that God works by mathematics. Their religion was a conglomeration of religion, astrology, alchemy, physical and mental science, and mathematics. Ancient astrology divided the starry heavens into 36 constellations. These were represented by different amulets called "Sigilla Solis," or the sun seal. These amulets were worn by the pagan priests, and they contained all the numbers from 1 to 36. By these figures they claimed to be able to foretell future events. These amulets were usually made of gold, yellow being the sun color. While being carried, these amulets were wrapped in yellow silk, as it was thought that the bearer would thus receive the beneficial powers believed to emanate from the jewel.» [26] 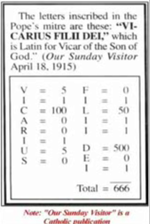 The Vicarius Filii Dei one of the pope's titles [15]