"I know thy works, and tribulation, and poverty, (but thou art rich) and I know the blasphemy of them which say they are Jews, and are not, but are the synagogue of Satan." - Revelation 2:9

This group really originated with leader Jacob Frank and were in league with the Jesuit Order’s Bavarian Illuminati. With the King of Poland serving as his sponsor, Frank was baptized into the Roman Catholic institution as were all of his Hebrew followers. Shortly after this time the Order imported the French Revolution from Bavaria into France, later giving way to the rise of Napoleon and his Consulate. On this three-man triumvirate were First Consul Napoleon himself, Second Consul Jesuit Abby Sieyes and Third Consul Roger Ducos. Napoleon was guided by Sieyes in all his campaigns, especially during his campaign in North Africa and in Palestine. For Napoleon, the Great Jesuit Avenger, on the advice of his Jesuit master sought to make Palestine “a homeland for the Jews.” Thus, Napoleon was really the first Masonic Labor Zionist leading the movement for Jews to repopulate their promised land for the benefit of the Jesuit Papacy yet to be restored in 1814. During the 19th century, after the Order had completely gained control of both the British Crown and Parliament, the Company’s socialist-communist British Fabian Socialists gave birth to the socialist-communist British Labor Party and hence to the socialist-communist Jewish Labor Party of the historic Masonic Jewish Labor Zionists. The leader of the Masonic Jewish Labor Zionists was Theodor Herzl, the Jew who led the fight to found a new Jewish State in historic Palestine after the Jesuit-concocted Dreyfus affair, it to be a rebirth of the historic nation of Israel. The real purpose for the establishment of a Jewish homeland was to revive the Knights Templars’ Latin Kingdom of Jerusalem (AD 1099-1291)—for the benefit of the pope, the pope overseen and captive to the Jesuit Superior General, the Grand Master of the New Knights Templars. These Masonic Jewish Labor Zionists rule Israel for the benefit of Rome, not for the benefit of the Lord’s beloved racial Hebrew/Jewish/Israelite people in Israel. The Labor Zionists are completely in the arms of the Jesuit Papacy and are in fact Jesuit Temporal Coadjutors. [9]

This group was led by Vladimir Jabotinsky (“the Lone Wolf”) , a Polish Hebrew patriot who genuinely sought to establish a Hebrew/Jewish nation for the benefit of the Jews living therein. He had the courage to attempt to save the Jews of Poland from their approaching fate at the hands of Jesuit coadjutors Hitler and Stalin, but was resisted by Masonic Jewish Labor Zionist David Ben-Gurion who insisted that millions of Polish Jews must perish if Israel was ever to be re-established. Hence “the Lone Wolf” was murdered in Hunter, New York, given the Order’s “poison cup” for his disobedience to the pope’s Labor Zionists. Jabo’s truly patriotic Irgun would be betrayed by the pope’s Labor Zionists and merged into Ben Gurion’s Haganah, later the Mossad created by the pope’s pro-Nazi American CIA and German BND in 1951. For daring to fight against the pope’s Masonic Jewish Labor Zionists, the Revisionist Zionists were terminated. See Ben Hecht’s Perfidy [10] for the entire, heart-breaking story. [11]

This group is led by the Talmudic Orthodox Zionists. They believe Israel has no right to exist save for the presence of their Messiah. Hence, they are unreservedly against the present state of Israel, and seek its destruction. It is for this reason we observe these Orthodox Zionists walking arm-in-arm with the Muslims calling for the destruction of Israel. The Orthodox Zionists do not believe their own Hebrew scriptures: for how can Messiah come to Jerusalem in power to deliver the city if there is not an earthly Jerusalem populated by Jews (Zechariah 14:1-4; Joel 3:18)? [12]

This group, led by men such as Billy Graham, John Hagee, Pat Robertson and a host of other “Christian ministers” defend both the pope’s CFR / Vatican-led government of Israel as well as the right of the Hebrew/Jewish/Israelites to live in their own land to the exclusion of all other races and nations. Your Editor, sorry to say, was once a Christian Zionist. These men are half-wrong and half-right: they back the wicked government of the pope’s “Revived Latin Kingdom of Jerusalem,” but help in every way possible for Jews to remain in their land. These heretics refuse to acknowledge Rome’s rule over Jerusalem to the detriment of the Jews bound by the glorious and everlasting Abrahamic Covenant. They will never face the fact that the pope’s government ruling Israel has murdered its own people, refused to end the Arab-Israeli agitation, has attacked the American Naval Vessel USS Liberty (on orders of Masonic Jesuit coadjutor Lyndon Johnson), and whose Mossad is the right arm of the pope’s CIA in the region. Many Protestants and Baptists are fighting the pope’s American-led 12th Crusade against the Muslims (the Shia Muslims) believing they are obeying the Word of God (OT and NT) defending the right of the Hebrews to live in their land. The fact is these Christian Zionists are creating worldwide anti-Jewish fury by refusing to address the wicked government of Israel ruled by the pope’s Masonic Jewish Labor Zionists for the benefit of that antichrist in Rome, Pope Benedict XVI. [13] 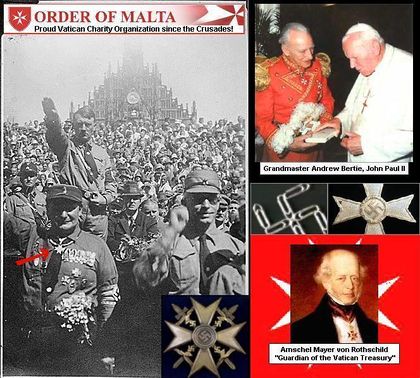